With a 134-acre business and industry park now available in Phelps County, work has begun to recruit new companies to the new site. In addition to PCDC’s advertising in trade publications, another effective way to market the space is by attending trade shows. 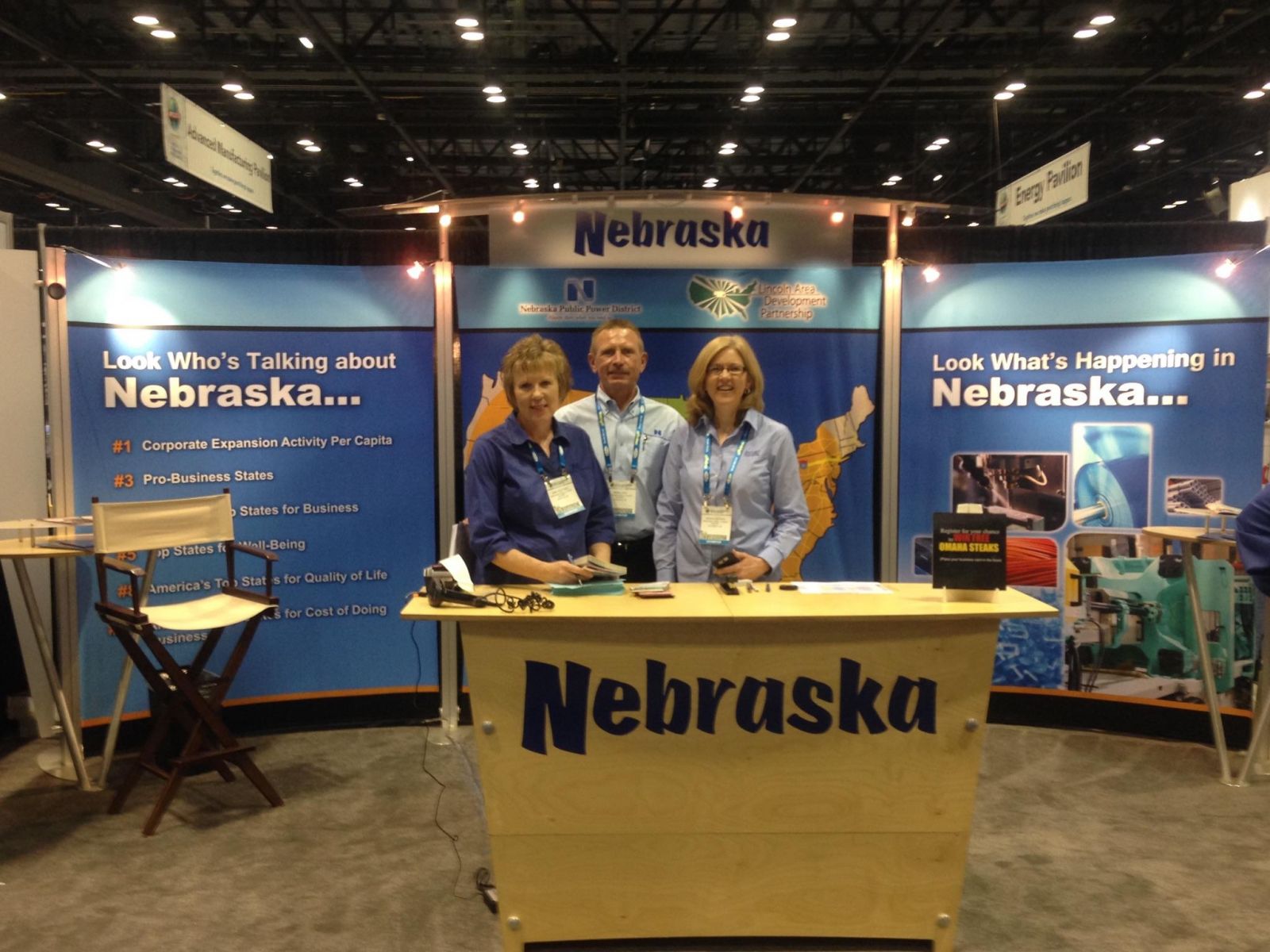 Boyken said she was “very happy” that Phelps County had a presence at the event with more than 60,000 plastics industry professionals.

At the show, Nebraska Public Power District sponsored a booth highlighting Nebraska. Boyken was able to give Phelps County a presence at the booth and promote the business and industry park. She generated about a dozen leads by attending the show.

“We received several relationship-building “points” as we were one of two Nebraska communities that attended and will be the only ones privy to the prospect list,” Boyken said.

Two NPPD staff, Boyken and a representative from the Lincoln Partnership attended to help with the Nebraska economic development booth.

Mary Plettner, Senior Economic Development Consultant with NPPD who also attended the plastics show, said trade shows are an effective way for local economic developers to market their community to industry sector in which they have a competitive advantage.

“It also helps them to learn more about the industry and develop those relationships with key decision makers who attend these events,” Plettner said. “Key competitive advantages for Phelps County and other areas in Nebraska related to the plastics industry include a central location, reasonable access to interstate and highway systems, competitive electric rates, quality labor, and rail service capability.”

Plettner has seen a trend toward companies locating near ethanol facilities to convert byproducts from the plant to environmental friendly plastic feedstock. Nebraska is the second largest ethanol-producing state with 24 ethanol plants and an annual production capacity of more than 2 billion gallons.

NPPD Economist Ken Lempke, Ph.D., has conducted extensive research on the plastics industry and has put together a resource called, “Nebraska Profit Opportunities for Manufacturers of Plastics Products.” The study mentions the success of Royal Engineered Composites of Minden as one example.

Boyken said the plastics show was a beneficial target market for Phelps County because the raw materials for plastics are shipped by rail, and companies who need rail access might consider locating in the new Phelps County Business & Industry Park because it has rail access.

And, plastics companies may be a good match with Phelps County’s existing manufacturers.

“By attracting a plastics manufacturer, we not only grow the economy, but we also create some synergies in the workforce that will benefit existing employers,” Boyken said. “BD’s odds of finding qualified, skilled candidates improves when there’s another plastics manufacturer in the area. Rather than leave the area for lack of options, individuals trained in plastics manufacturing processes can stick around because they’ve got employment options.”

At the show, Boyken and NPPD officials met with two company officials in pre-arranged meetings. Although one of the businesses was not interested in locating in Nebraska, Boyken said the meeting yielded some unique ideas about working with existing companies to create jobs with higher-than-average pay.

Boyken learned how to approach companies on a “cold call” to determine interest in locating in Phelps County. One company could be a viable prospect to Phelps County as it was looking to hire a sales manager in Nebraska to serve the Plains states but didn’t yet have a centralized manufacturing plant to reach those markets.

Written for PCDC by Kristine Jacobson

Apr 17 2015
With a 134-acre business and industry park now available in Phelps County, work has begun to recruit new companies to the new site. In addition to PCDC’s advertising in trade publications, another effective way to market the space is by attending trade shows.   Monica Boyken, Executive Director of the Phelps Count...Continue Reading

Jan 27 2015
USDA Rural Development is seeking applications for the Rural Energy for America Program (REAP).  REAP is available to agricultural producers and rural small for-profit businesses to complete energy efficiency improvements or install a renewable energy system to their current farm or business operations.    Grants and guaranteed loans may be used fo...Continue Reading

Reeling in the Big Fish

Dec 17 2014
With the task of recruiting a new business or industry growing more competitive each year, how can Phelps County successfully “reel in a big fish?”   Like fishing, industry recruitment involves persistence and the right location. But, “snagging the catch of the day” in economic development also involves teamwork, collaboration and flexibility.   PCD...Continue Reading