The Sun Theater is an Iconic Holdrege Landmark, Providing Entertainment for Generations

The Sun Theater is at the epicenter of entertainment for folks in Holdrege and all Phelps County.   Generations of residents have grown up watching the latest Hollywood blockbusters at the Sun Theater. This iconic landmark was originally opened in 1927 and for the past ninety years it has taken local residents on adventures, introduced them to superheroes, made them laugh, and been a generally fun place to spend a few hours with friends and family. 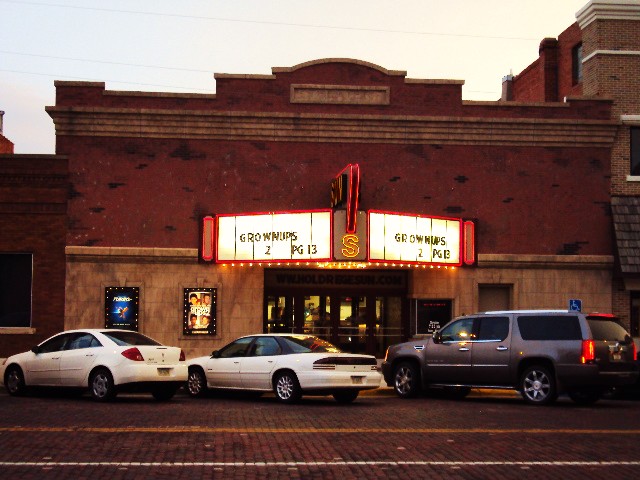 Entertainment venues, like the Sun Theater, are Phelps County assets and part of what gives our residents a high quality of life. Beyond good jobs, schools, and housing, local residents want to be entertained, be able to enjoy dinner out with friends, play at the park, and have fun on the weekend. The theater helps to make that possible.

Manager Susan McConnell commented, “We are very fortunate to have the theater. When we were in jeopardy of losing it, it was a scary thing. I grew up in Holdrege and it was part of my childhood. If it had been taken away it would not have been right.  Now, I get to be part of making the theater available for other children growing up here.”

To ensure that the theater could continue to be there for future generations, several Holdrege families purchased the theater in 2008 under their company, Strategic Community Investments Group LLC. Since that time, the theater has undergone a complete renovation. They essentially gutted the theater, removing everything from the old concessions counter to the worn and outdated seats. They replaced the equipment with a modern electronic operating system and replaced the screen, making it significantly larger. Those who grew up in Holdrege but haven’t been to the theater since the renovation are often surprised by how different it looks. It is truly a modern, comfortable, and almost luxurious theater in the heart of downtown Holdrege.

One aspect of the theater they wanted to keep the same or similar was the exterior. The owners wanted to maintain the historic charm of the theater, especially since it is a registered historic building. The PCDC helped to contribute to the cost of updating the exterior and signage in keeping with that vision.

The owners of the Sun Theater and manager, Susan McConnell (Suzy), work to keep the theater open and accessible to the community, both as a place for entertainment and community gatherings. The theater screens blockbuster hits and the occasional independent film, with screening decisions made with the help of a booking agent in Beatrice. Sometimes showings are the result of community members requesting a particular film. 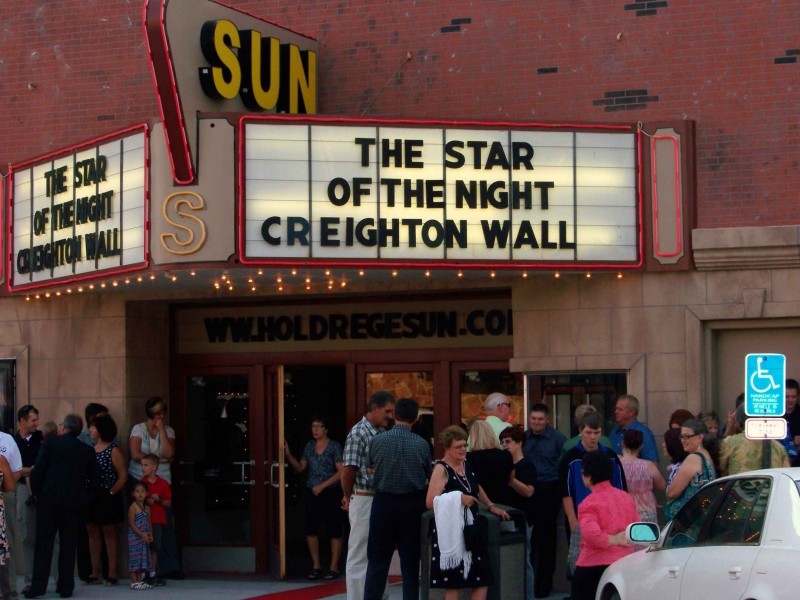 In addition to regular movie times, the theater is also available to rent out for parties. Birthday parties can be held ahead of a screening or the theater can be rented out for a private viewing of a current film or for groups wishing to play their own movie.

The Sun Theater also participates in local events and supports charities throughout the county. For example, every year, they collect food for the food bank. This year, Suzy is putting together a free screening of Christmas Vacation, a classic Christmas movie with a cult following. She is considering tying it in with an ugly sweater competition and asking people to bring cans for the food bank instead of paying for admission. The screening will be completely free for community members and she hopes that will encourage guests to support the food bank, while also having fun. Details for the event will be forthcoming but it is likely to be held on December 22nd.

Beyond an entertainment destination, the Sun Theater has become a go-to stop for foodies and those looking for a tasty snack. Famous for their popcorn and delicious seasonings, the theater attracts guests who are craving their must-have popcorn. The requests were so regular, that they began offering popcorn to go and have several people stop by each night to grab some to go. Suzy credits the great taste with their special recipe and using Nebraska-grown Preferred Popcorn, the absolute best.

Those who are new to the area or haven’t been to the Sun Theater in some time should visit this historic landmark and enjoy an afternoon or evening in Holdrege. This is a comfortable small-town theater with the best popcorn around. More than that, it is part of the fabric of the community. This is why with a fulltime job, Suzy continues to manage the theater, “The theater is part of my community. I am very proud of what the owners have done to the theater, what they did for the community and happy to be a part of it.”

Oct 25 2018
PCDC announced its new downtown revitalization program in September, and the first grant to spruce up a building has already been approved. Current owners of the former Holdrege opera house are hoping exterior improvements could begin as early as late October with the help of PCDC’s new GO! DREAM program (Downtow...Continue Reading

Oct 25 2018
The Nebraska Passport program has brought hundreds of visitors to Phelps County, and the Phelps County Development Corporation is encouraging more local attractions and stores to be involved as a way to boost tourism and the local economy. “By becoming a Passport stop, we are boosting the economic impact for th...Continue Reading